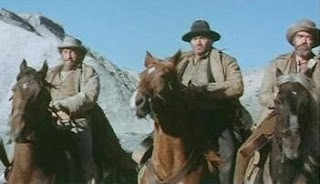 From HOLLYWOOD TRAIL BOSS by Burt Kennedy (in 1997)
Ernest Borgnine! Jack Elam calls him Ernie Bombastic. He said Ernie would never let him sleep in when they were rooming next to each other during the filming of HANNIE CAULDER. Early every morning, Ernie would proclaim, "Oh, what a beautiful morning," or "It's a beautiful day."Ernie's beautiful wife Tova sells products that make people look young. Ernie, on the other hand, keeps everyone young.
His is an absolute tonic to be around. He has more energy than a truckload of Jack LaLannes, and a sweeter man never walked the earth.
Ernie is eighty, a fact Jack Elam is constantly reminding him of. But he goes through life like a runaway train! You just can't be downhearted around Ernie. He is the best and I love him.
Posted by William Connolly at 5:19 PM