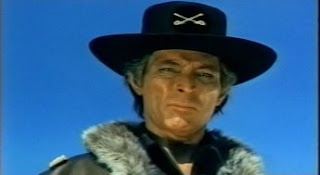 From HOLLYWOOD EXILE Or How I Learned To Love the Blacklist
by Bernard Gordon
Alex Singer struggled with CAPTAIN APACHE. I thought that some of the scenes he directed were good - and some weren't. But Alex never bit the bullet and complained about the script pages he was handed to shoot. Van Cleef liked him, which may or may not have yielded him Brownie points in my book, but Alex did have a way of getting along with actors. He didn't get along with (co-writer & co-producer Milton) Sperling, who complained about him and to him endlessly. Once, after Sperling and his wife Margit had dinner at our home, Sperling got Alex on the phone and proceeded to chew him out mercilessly. I was very angry about this. I landed on Sperling and told him I never wanted to hear him talking to the director like that again. I told Yordan I thought Sperling was demoralizing Alex and I wouldn't take any more responsiblity unless Sperling was barred from the set. Yordan did warn Sperling to stay away, but the carping never ended.
In the early days, my producer chores included quite a bit about meals and eating. At first I tried to socialize with Lee Van Cleef and his wife. I invited them to dinner at one of Madrid's premier seafoot restaurants. At the Bajamar, I urged them to order the angulas, which were the choicest item on the menu and one of my favorites. These were tiny eels that came out of the kitchen looking like a dish of three- or four- inch strands of white spaghetti. They were prepared in a steaming sauce of olive oil, garlic, and red pepper, served in a hot earthenware bowl. You couldn't tell that they were anything but spaghetti unless you looked closely and found the two tiny black spots at one end that were due to grow into eyes. This sounds disgustingly carnivorous, but I'm sure the baby eels, not more than a day or two old when plucked from the sea, didn't suffer as much as a carp or a trout. The Van Cleefs looked at this dish and shoved it way in disgust. I had blown it with them again.
The year was ending and so was the shooting of CAPTAIN APACHE. As usual, Yordan kept trying to patch up the holes with new and irrelevant scenes that only further confused the story. It kept Alex Singer working, if not happy. Alex was devastated when, despite all his hard work and strenuous effort to please, the next film was slated to be made without him. The decision to use another director had nothing to do with Alex. It was a necessity born of circumstance: (lawyer Paco) Lizarza had managed to torture the rules of Spanish nationality, and the next film would be "Spanish". This was a great coup and a significant advantage, but it meant even more emphasis on hiring Spanish film workers. Specifically, we would need a Spanish director.
Posted by William Connolly at 6:12 AM