A French actor in a Sword and Sandal flick 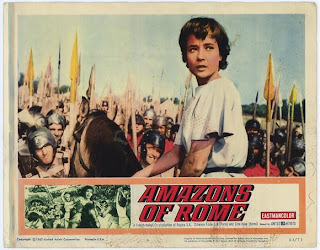 Michel Piccoli: France discovered what the critics defined "Cinema Bis": Maciste against Nero, the galleys of Cleopatra, the bad Romans, the innocent young girl or her vicious counterpart, the courageous slaves etc. Not forgetting a curious mythicism that contributed hugely to the charm of this kind of film. The Pepla made the glory and the fortune of the actors who under the light of the sun displayed their muscles for all to see.
There came a time for me to be inserted into this World and all things considered it was an excellent experience. The movie was LE VERGINE DI ROMA (VIRGINS OF ROME/AMAZONS OF ROME), directed by Vittorio Cottafavi. LE VERGINE DI ROMA didn't evade the rule of economy that was in force for these films. Little money but lots of papier-mâché, and an imposing appearance. To tell the truth the extras were not expensive, they were a part of the Yugoslavian infantry.
The producers courted the Yugoslavians; there was the great Serbian plain and a real possibility to economize that came through borrowing the army, and I must say that we made everything look very beautiful. Rome was reconstructed in the Serbian plain and as we stood in our costumes under a close and biting wind, everything took on a fantastic air. The Virgins of Rome, the Amazons with a single breast, were interpreted by Yugoslavian cavalry, who galloped around with wigs of yellow, black, brown; with trousers showing under tunics, and socks poking out of sandals. Cottafavi reigned his little world with elegance and detachment, and everything went well up to the day that a conflict, that had been very obviously brewing, was transformed into a crisis: Cottafavi abandoned us. One of the principal actors had wanted to take over the direction from him, but we inherited, following a necessary coup d'etat, a cineaste who a few days later made it the actor's turn to be fired.
Posted by William Connolly at 9:03 PM