The Making of HANNIE CAULDER 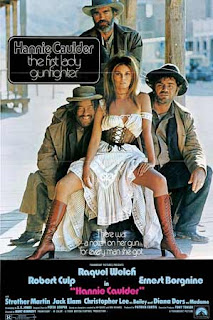 From HOLLYWOOD TRAIL BOSS by Burt Kennedy
December 2, 1970
Left for London via TWA. Going to make picture starring Raquel Welce [HANNIE CAULDER]. Raquel is playing woman gunfighter in a serape. Sergio would probably call it A TITFUL OF DOLLARS.
December 3, 1970
I'm in London, and they've set me up in an office in Rogers and Cowan's. We're on the tenth floor and there's a sign on the door that says IN CASE OF FIRE, GO TO THE WINDOW AND JUMP TO THE ADJOINING ROOFTOP. Jesse Owens couldn't make it - it's forty goddamn feet!
December 7, 1970
Twenty-nine years ago the Japs bombed Pearl Harbor. This week I bombed London with DIRTY DINGUS MAGEE. Leaving for Madrid in the morning.
December 23, 1970
Ran into John Huston at the Hilton in Madrid. We got drunk and decided to make a steeplechase picture with my daughter's horse. Also made plans to partner in a picture in Africa. Great idea for a film. We both would probably end up in the elephant burial ground. Huston is still a pompous pain in the ass, but I like him.Leaving for London on the 22nd, back to Madrid on the 29th.
December 25, 1970
This is the second Christmas at the Hilton in Madrid that I've spent alone. Miss my kids, but they're fine.
December 26, 1970
What the hell happened to Christmas? Left Madrid for London.
January 2, 1971
New year - starting HANNIE CAULDER on the 18th. I'm ready.
January 9, 1971
David Haft in the producer of HANNIE CAULDER. He thinks he's a writer - what he says goes. I hope he doesn't say Raquel Welch, because without her, we have no film. Pat Curtis, Raquel's husband, says he's the boss, and what he says goes. Wish to hell he'd say David Haft.
January 1971
The company ran out of money and I'm now in Dublin, Ireland, where the girls are not pretty. If I ever saw a place needing a street-sweeper, this is it. I think they got the "wearin' o' the green" from the mold.
March 18, 1971
Sitting at a studio in London called Twickingham. Waiting for the film to come in. Time for decision - I either cut the picture of cut my throat. Like I've always said, success is getting up one more time than you get knocked down.
May 31, 1971
It's hard to believe, but I'm on a plane to New York, then out to see a cut of HANNIE CAULDER. The producers claimed I was in breach of contract, which I wasn't. The only way I could stay out of court and get the money they owe me. What can I tell you?Arrived in New York and went to the Americana Hotel. I was staying there when John Kennedy was shot. Also went there when I heard about Audie Murphy being killed.
June 2, 1971
Got to London to find they had cut HANNIE CAULDER into a mess. They were about to score it anyway, but I can help it. I've already been offered two scripts in London. Things are looking up. Recut the picture and they sold it to Paramount within a half an hour.
June 18. 1971
Went back to Hollywood.
July 21, 1971
This is hard to believe, but I'm back in London for the final cut of HANNIE CAULDER. This isn't a picture - it's a way of life.
November 2, 1971
Wrote a new script - THE TRAIN ROBBERS. Sent it to Duke Wayne.
Posted by William Connolly at 2:06 PM