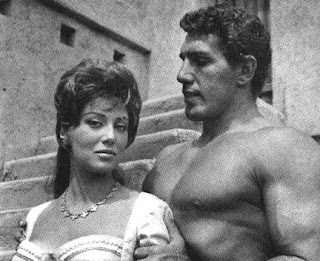 Larry Anderson and Gordon Harmer interviewed Samson Burke in Toronto on September 8, 2002.
Gord: How many years did you wrestle?
Samson: 9 years. I used the names Sammy Berg and Samson Burke in the ring. In fact I fought Lou Thiez 3 times for the Championship Belt. I was in Los Angeles when Norman Mauer spotted me for a film called THE THREE STOOGES MEET HERCULES, which was being shot at Columbia. It was shot at the Columbia Ranch. Of all the films that I made, that one was probably my favorite. I was wrestling in LA and a friend suggested that I try out for the role of Hercules. Norman Mauer asked me to read for the part and without even a screen test, I got the part while others that were waiting, were told to leave. Even thought I had no prior acting experience. Norman Mauer was very helpful and understanding in guiding me through the role. The Stooges helped me immensely.
Gord: Tell us about Gordon Mitchell and Joe Gold and your times together in California.
Samson: Gordon and I used to run together, 2 or 3 times a week. We used to live in the same area. Joe Gold lived in Santa Monica and wasn't part of the clique. Gordon Mitchell brought me over to Italy to film THE VENGEANCE OF URSUS. In fact, I stayed at his place for a while. We had a gym at Mitchell's apartment on the roof. We had a makeshift gym with an umbrella to shade us from the sun as we worked out. We got a friend at a small machine shop nearby to make us weights and bars.
Larry: What was it like to work with Luigi Capuanno?
Samson: He was a Commander in the Italian Navy and did "everything by the book". Very straightforward. The Italians were more laid back in their approach to filmmaking. A very relaxed set.
Gord: Did you have an agent?
Samson: Yes, I had to have an Italian agent. It was the same agent that Gordon Mitchell used.
Gord: What about Wandisa Guida?
Samson: She was a very pretty girl. She got married soon after that (THE VENGEANCE OF URSUS), and never worked again. I saw her once after that, I stopped her in the street; she didn't want to work anymore. She said goodbye and that's all that matters
Posted by William Connolly at 10:09 PM