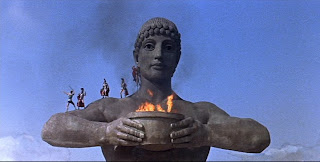 Duccio Tessari: The idea of giving IL COLOSSO DI RODI (THE COLOSSUS OF RHODES) a pronounced epic sense was Leone's. I did two screenplays with him: this one and FISTFUL OF DOLLARS. All that was epic in these screenplays was his; all that was ironic was mine. Sergio is epic even when he eats! In Sergio there is the desire to tell these stories, he is an extremely receptive person, as soon as you give him an idea, he begins to play tennis with you, he pushes you to develop the idea. Now they say that he is afraid of failure, and as a consequence, he is very attentive to everyone.
Posted by William Connolly at 7:29 AM