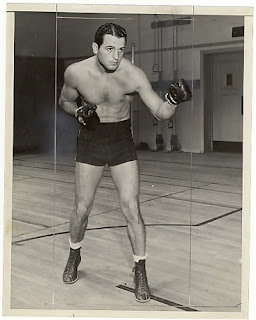 From DINO The Life and Films of Dino De Laurentiis
by Tullio Kezich and Alessandra Levantesi
A fledging producer working out of the FERT Studios in Turin, Dino De Laurentiis started his career with two short films.
"The first, a comedy titled TROPPO TARDI T'HO CONOSCIUTA (I MET YOU TOO LATE), was shot in July 1939. The project was a fiasco, and all prints of the film have vanished....
"He had better luck with the second project. L'ULTIMO COMBATTIMENTO (THE LAST FIGHT) was a semiautobiographical film written by the ex-middleweight champion Enzo Fiermonte, who also starred. Fiermonte had just returned from the United States, where both the boxing underworld and his American wife had caused him major problems. Dino went to meet Fiermonte in Naples after his transatlantic crossing and immediately signed him to an exclusive contract. His success with the pugilist's film neatly balanced out his failure with the comedy. Indeed, these two projects represented a great leap forward in his career. Certainly they made it much easier for Dino to position himself as the savior of FERT."
Posted by William Connolly at 1:04 PM