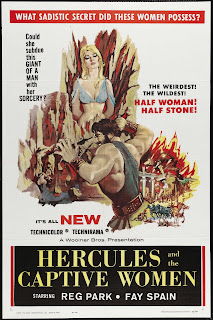 Duccio Tessari: Totally dependant on our meager means, we shot at Cinecitta and in nearby Manziana. The base was Manziana because there were the woods. Then Montecelato, for there was a waterfall that was used by all our directors, from Campogalliani to Visconti, from Lizzani to Cottafavi, all the directors from Italian cinema, for any type of film, they went to Montecelato. Then Torre San Lorenzo, and again Fogliano. Fogliano was one of those classic locations which served well for everything.
These films, however, were prepared with great detail and without sparing expense. With Pasqualino De Santis, as cameraman, and I as assistant director, we had done MESSALINA, VENERE IMPERATRICE (MESSALINA) with Cottafavi. And remembering the times of Messalina together, Pasquale told me: The means that I have now to do a film for Francesco Rosi on THE MATTEI AFFAIR, with Gian Maria Volonte, they are a tenth of those that we had to do the epoch of a Messalina type film."
The truth is for that type of film, we did spend. All the uniforms of the pretoriani (The Emperor’s Guard), the armors, the sandals were made as new, the furnishings were studied and arranged with such great accuracy, that it would not be possible to do more. And then the chariots, the perfection with which they had to be reproduced, the requirements of the horses which had to be got ready, the villages and Roman taverns reconstructed with profound respect for Historical documentation. Or all the incidental items and the special effects typical of such films as ERCOLE ALLA CONQUISTA DI ATLANTIDE (HERCULES CONQUERS ATLANTIS, aka HERCULES AND THE CAPTIVE WOMEN), realized with the richness of all our efforts. For the scenes of massed crowds, we then had a boundless abundance of extras that, because there was lots of work, were professional extras. And therefore one was not obliged to give in to the blackmail of the types of extras of today who have made life impossible to the point that one prefers not to shoot in Rome in order to avoid them.
Posted by William Connolly at 11:42 PM