More on the making of THE DESERTER 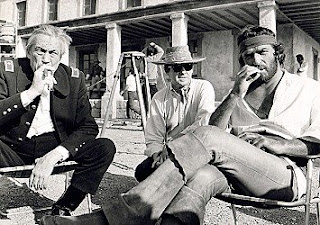 From HOLLYWOOD TRAIL BOSS by Burt Kennedy
Speaking of being electrocuted, I was doing THE DESERTER in Rome, and we were shooting a scene which was supposed to take place during a thunderstorm. They way you make lightning is you take two electrical cables and put them on what we call "scissors", which are just long poles that are bolted together at the bottom. Then, when you want to have lightning, you pull these poles together, like a pair of scissors, and then the two arcs get close enough, the spark will jump from one to the other and give off blue flame.
So we were doing this thing onstage in Rome, and I said to the effects man, "Are you gonna use scissors?"
He said, "Oh, yes, yes." They always told you what you wanted to hear in Italy.
We got going, and all of a sudden I heard thunder, and it's time for the lightning, and I looked up to see an electrician. He had on a pair of dark goggles, and instead of having the scissors on the boards, he had these two cables in his hands, which he held out in front of him until they sparked. He was standing in the rain doing this!
I stopped everything and said, "You can't do that! Get scissors!"
The effects man argued, "No those are too dangerous."
I insisted. "But the guy could be killed!"
He tried to assure me, "No, no, we do this all the time."
They may still be doing it. I don't know.
One of the problems with being a director is that you probably make four hundred decisions in a day, little things. People come up and ask, do you want this, do you want that.
Sometimes an actor would come up and say, "Am I finished?"
Not thinking, I'd say, "Yeah."
And they'd ask, "Can I go home."
And I'd say, "Fine."
On this one occasion I was in Spain shooting THE DESERTER, on a location called El Torcal, north of Malaga. We were up in these mountains. Richard Crenna and Ricardo Montalban were doing a scene. It was late in the day, and Richard came up to me when I was busy and said, "Are you through with me? Can I go home?"
I said, "Yes."
Later, when we were getting ready to do this scene, we got the camera set up and all of a sudden I realized I'd sent Richard Crenna home. Luckily, by the time they got it lit, it started to rain, and when it was raining hard enough, I just said, "All right, that's a wrap. Let's go home." Nobody ever knew that I had goofed.
I take that back. I'm sure Crenna did, because he's a good director himself and I suspect he was trying to pull one. I never did ask him, but I will one day.
Posted by William Connolly at 9:53 AM