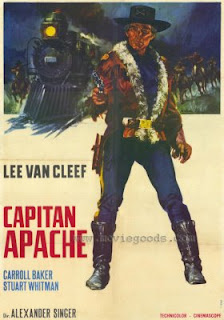 From HOLLYWOOD EXILE Or How I Learned To Love the Black List by Bernard Gordon
(Philip) Yordan was looking for a director for CAPTAIN APACHE. This involved me with a close connection. Alex Singer was married to Judy, Julian's young sister. (An old friend of Gordon's, Julian Zimet co-wrote CIRCUS WORLD and CUSTER OF THE WEST.) Alex had started out in the Bronx as a hopeful filmmaker and a close friend of Stanley Kubrick. Kubrick was already on his way with a number of major accomplishments, but, after a promising start with a single low-budget feature, Alex had stalled. As it turned out, he spent much of the rest of his life trying to compete with and catch up to the Kurbrick who had been his young buddy in the Bronx. In 1970 this still lay in the future. Alex wanted any crack at directing a feature film. He asked me to get him together with Yordan.Though Alex's feature-film credits were not impressive, he had a number of television shows under his belt. Yordan decided he was a competent professional. What's more, Alex was willing to do the job for a minimal fee of $25,000, something that inevitably appealed to Yordan, who also calculated that Alex would be amenable and manageable. He was right on all scores.
Posted by William Connolly at 6:17 AM