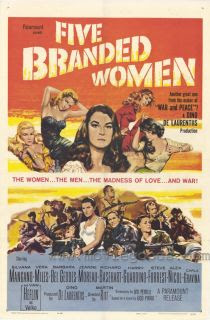 From DINO The Life and Films of Dino De Laurentiis
by Tullio Kezich and Alessandra Levantese
Set in Yugoslavia, it followed the story of five women who'd had love affairs with the occupying Germans and had their heads shaved by the partisans as a badge of shame. When he first heard the plot, Dino had one of his inspirations: "In a flash I saw an enormous poster with the shaved heads of the five girls, and underneath the names of five famous actresses." Reading through the screenplay, he decided that Gina Lollobrigida should play the protagonist. Meanwhile, he signed up the director Martin Ritt, whom he admired more than ever after having seen NO DOWN PAYMENT.
The troubles began at once. First, there was the inconvenient fact that the Yugoslav partisans in Ugo Pirro's original novel were fighting Italy's army of occupation. The villains were transformed into Nazis. Today, Dino denies that the decision was made under pressure from the government: "The fact is that the Italians conducted war in which the human factor really counted, while the Germans everywhere exceeded them in sheer cruelty." More serious difficulties arose when the Yugoslav government refused to collaborate on the film of even to authorize the shoot. Dio realized that in this region, the partisan war was considered a quasi-mystical event, a story that couldn't possibly be told by a foreigner. No problem, thought Dino: he'd shoot the film near Klagenfurt, Austria, where the terrain was quite similar. But there too, historical sensibilities got in the way; the Austrian extras were reluctant to don Nazi uniforms.
Meanwhile, on the eve of shooting, Lollobrigida withdrew from the project. The official reason was that she was unwilling to have her head shaved, and in fact, she had worn a kind of skullcap for the screen test. According to some, however, the star didn't want to risk being just another face in the crowd, especially when the crowd included four top-drawer actresses: Vera Miles, Barbara Bel Geddes, Jeanne Moreau and the young Carla Gravina. Of these, only Gravina agreed to have her hair cut in front of the press. Miles also went along with the tonsorial program, although she had her scalp shaved in private. But both Bel Geddes and Moreau opted for the skullcap, creating real headaches for the makeup artist.
When Gina defected, the producer didn't blink an eye. Instead he pulled the customary ace from his sleeve: Silvana (Mangano, his wife). She was more than willing to step in and utterly indifferent to the idea of sacrificing her locks. Asked about the issue, she responded at unusual length: "I must say that my first impression of my shaved head was pretty terrible... I was worried about the reaction of a person who's very important to me: my son Federico. He's not even five, and he adores women with long hair, at least to judge from the way he stares at them. What saved me, though, was another of his great passions: war. I explained to him that I needed to be a partisan, to shoot with a submachine gun, to fight like a man. Wouldn't a man with long hair be ridiculous? I managed to convince him. And then Raffaella and Veronica got into the game: all three of them wanted to get their heads shaved as well.
"The production challenged Martin Ritt. His background was in the theater, so he was unaccustomed to shooting exteriors, and the Italian-style chaos on the set was distracting. What's more, the project entailed transporting 114 cast and crew members up the Grossgluckner, to an altitude of nine thousand feet. With his Hollywood maestro in crisis, Dino turned to his old companion from the Centro, Pietro Germi, who had been hired to play a minor role as an actor. Germi agreed to help the struggling director. In a typical act of generosity, he demanded neither money nor title credit in exchange for having saved the movie.
Posted by William Connolly at 9:31 PM