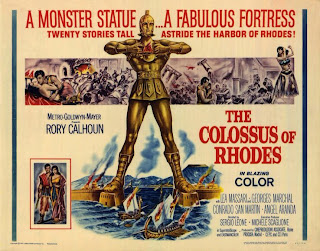 Sergio Leone: The tricks and effects used in filming the final cataclysm (for THE COLOSSUS OF RHODES) were fairly realistic. (Eros) Baciucchi, a craftsman who was even sought after by the Americans, and made many other films, was excellent and knew that I expected the scenes to be totally realistic. He studied everything to the millimeter and to the milligram weight and checked the consistency with which the sets would collapse, so there was no risk of hurting anybody: a lot of preparation that others didn't take, even though significantly there was a notable loss of time, and accordingly a considerable increase in costs. After having seen IL COLOSSO DI RODI, Aldrich invited me to direct the second unit of SODOM & GOMORRAH. I shot all the battle scenes in the environs of Marrakech, in two weeks with a thousand riders and a crew of seventy people.
Posted by William Connolly at 11:30 PM