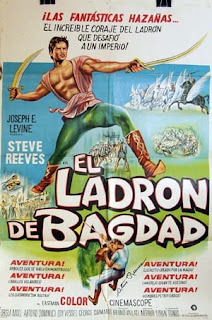 From An Interview with Steve Reeves from The Perfect Vision Magazine July 1994
TPV: I don't know if he's your nemesis or evil twin, but I'd like to discuss Joseph E. Levine.
SR: Joe Levine owned a theater in Boston. Through a friend of his, he used to buy films from Europe. I think the biggest one he bought before Hercules was Attila the Hun with Anthony Quinn. They were making pretty good money over here compared to what he paid for them. So his friend told him that Hercules was outselling every other picture, and that the people who made it had sold it to every country in the world except America, and that in Bombay it had played four times a day for two years.Knowing it was a winner in other countries, he bought it for the States, then put money behind it and did a great job promoting it.
TPV: Outside of his business skills, which were sizable, I haven't heard many humanitarian words about him.
SR: I haven't either. Two different times I was did pictures under contract to him, and both times he reneged on the contracts. Those were Thief of Baghdad and Morgan the Pirate. On Morgan, if the picture did over a certain amount at the box office, I would get an extra $50,000. The picture made well over what it was supposed to, and he wouldn't come up with the money. So I sued him, and in the pre-trial his lawyer advised him to pay me, so I got what I was owed from him that way. Then he came to Rome and threw a big party in his suite at the Excelsior Hotel. And he served something like spaghetti and meatballs. Now in show business you have to protect yourself, and what I always did, for prestige, would be to have my name above all other names, 70 percent the size of the film's title. Otherwise they could put it at the bottom under 20 other names, at 10 percent the size of the title. So I did that: 'No other name including director, producer, etc…' Joe Levine wanted his name as big as mine or bigger, and I said, 'No way. You made the contract, I'm the star of this picture.' So he got ticked off and threw his spaghetti up in the air, and it was hanging off the crystal chandelier. If he didn't get everything his way, he got angry.Those were the only two run-ins I had with him. In 1976, he was putting Hercules in theaters for the second time and he wanted me to do personal appearances with it. I asked for $500 a day, plus my expenses, and he said, 'Oh, we'll just get some look-alike for $25' It was ridiculous. Today, if I go to openings of fitness centers, or to a contest where they want the winner to receive a crown or a trophy from me, I'm there for two hours and I get $2000. And he wouldn't give me $500 for the whole day to publicize a picture which I starred in and which made him a fortune.
Posted by William Connolly at 11:56 AM