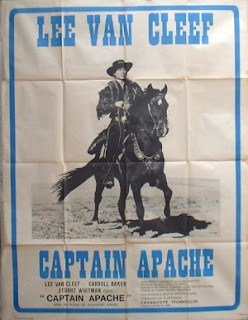 From HOLLYWOOD EXILE Or How I Learned To Love the Blacklist
by Bernard Gordon
(Gordon was hired by Philip Yordan to help produce a slate of films for a new studio built in Spain that was financed by a London real estate agent. While he tried to help A TOWN CALLED HELL in post production, Gordon's first project on this deal was CAPTAIN APACHE.)
These were the good times that kept Yordan awake nights. Money was coming in. Films being made. The sky was the limit. He concentrated on the trickery of co-production deals with France and Italy, but this wasn't enough. He made a serious foray into purchasing foreign-made films, mostly Italian Westerns that could be dubbed into English and then marketed to the burgeoning American television market. To move into the vast Italian marketplace, which was producing Westerns by the dozen that could be picked up for almost nothing in American dollars, Yordan asked Julian to help. Back home in Rome, Julian was to look at the films offered for sale, then report back to Yordan on those he thought useful for the American market. Julian would be paid for his time, and, sometime in the by-and-by, take a cut of profits.
I too was working for pie-in-the-sky - no salary, just a peseta expense account, but this amounted to $500 a week in local currency - a princely sum, considering the cost of living in Spain at the time. Yordan freely, as always, wrote up fine documents guaranteeing me percentages of the profits of all the films I worked on. I knew enough by now to demand such contracts but to pay little heed to them. This was, after all, a great learning experience, and I was having a ball.
The co-production problems were trying. We received funds in the currency of each participating country, then used that currency for payment for goods and services in that country. For instance, we had to be certain to hire enough Italian actors or production personnel - or French or Spanish - or use the post-production facilities of a given country to prove the money contributed by each country was actually spent for film industry functions in that country. This led to many problems and compromises, corner-cutting or bending the rules, sometimes breaking the laws. The end result was significant because, in addition to finding funds to help finance the films, a co-production meant a favorable and highly desirable "nationality" for the film. If a film had nationality, that film had great tax advantages as well as favored distribution and exhibition in each country. The film would then be considered a local product, not subject to import quotas. It was not possible to get investors from a given country unless the film had nationality for that country. I was learning.
Posted by William Connolly at 8:51 AM