Preparing the way for ULYSSES 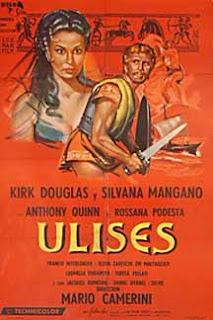 From DINO The Life and Films of Dino De Laurentiis
by Tullio Kezich and Alessandra Levantesi
(After World War II, De Laurentiis eventually went back to work as a producer at Lux. He and another producer, Carlo Ponti, were the most successful at Lux, so they decided to break away and form Ponti-De Laurentiis productions; though the on-screen credit would read "Produced by Dino De Laurentiis and Carlo Ponti".)
Inspired by Gualino's lessons at Lux, animated by his dream of creating an international cinema, Dino undoubtedly was thinking big. He envisioned films shot in English (which he didn't understand), with appearances by the great stars of Hollywood (with whom he couldn't exchange a single word), the whole thing underwritten by large reserves of capital (which he didn't possess). But the early 1950s, however, the producer couldn't deny that the real action was taking place in Los Angeles. He refused to be cut out of it, despite the obstacles. In fact, the challenge attracted him, as if it were an immense blackjack table.
This attitude put him in opposition to Ponti, who preferred a less risky policy. Carlo wanted to stick with the Toto films, which cost little to make and earned plenty, and with those tales of romance and tragedy enjoyed by the vast legion of Sunday moviegoers, whose ranks hadn't yet been decimated by television. Carlo's reasoning was simple enough. Why should they risk their necks to make a spectacular that could sink them financially, when they could earn equal (or even bigger) profits with the usual junk?
With Ponti, we never had a financial structure that would allow us a complete production-distribution cycle: we were living day to day. We worked with minimal guarantees from the distributors, selling the completed films to Lux, Titanus, and other companies. And the film division of the Banca Nazionale del Lavoro took its cut from these contracts, having already advanced us low-interest loans. So we scraped along until each film was released, but if the film didn't take in any cash, we were in trouble, and meanwhile we had to keep covering our general expenses and our interest payments.
These were serious problems. The general expenses had to be tallied on a film-by-film basis, but sometimes the budget was too modest to absorb the appropriate items. Sometimes we exceeded our estimates, and in those days, if you went over by even a little, it was already too much, becasuse we were always on the ropes: a bounced check would be enough to put us out of business. I realized taht we had to free ourselves from this nightmare of promisory notes. And in order to do that, we needed to think on a bigger scale, with a single financial point of reference.
Ponti, who had his doubts, tried to rein in his partner. But Dino refused to give up his dreams, which were perhaps tinged with megalomania. The first widescreen epic that De Laurentiis tackled, dragging Carlo along behind him, was ULYSSES.
Posted by William Connolly at 10:11 AM