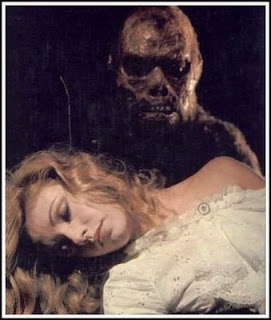 From HOLLYWOOD EXILE Or How I Learned To Love the Blacklist
by Bernard Gordon
I borrowed Arnaud from his hated London chores of writing horror film scripts under Yordan's supervision. He was pleased to return to Spain and go to work with me writing a script he felt had more promise. The PANCHO VILLA production absorbed me and I had little time to work with Arnaud. I liked his idea of placing a troupe of circus performers on the period train and playing out a suspense story with them. He wrote a script draft, and though it had its charms, it didn't have the action, suspense, and horror elements that I was expected to deliver. After a couple of more passes, I decided Arnaud was stuck with his initial concept, and, difficult as it was for me to switch from one friend to another, I got Julian to come in and work on a quite different story. I was functioning now as a producer in a way I didn't particularly enjoy, as I had spent much of my working life assailing stupid producers who only knew how to switch writers, but I was under pressure from London to get a script and a production going pronto.
Julian and I worked out a more traditional story outline. He wrote his version of the script, a first draft. An archeologist unearths a creature from outer space that has been trapped in an icy Siberian wasteland since a prehistoric period, before even hominids existed. The creature is crated for shipment back to Europe on the Trans-Siberian Express. It revives. Having witnessed the development of the Earth and of mankind, the creature intends to survive and return to its own galaxy. You can take it from there. Eugenio, our Spanish director, consulted with us, but, like any director actively shooting a film, he scarcely had the time or energy to breathe.
By September, with VILLA in the can, we all wound up in London for consultation. Eugenio and Julian were there. Eugenio and I were not satisfied yet with the script, but he was more emphatic - he wouldn't direct the film in its present form. Julian and I met with Yordan in the new offices on Audley Street. I told Yordan we were not ready to go. "The script needs more work."
Yordan wouldn't hear of it. We had to get a picture stated right away. "You can rewrite until the cows come home," he insisted in his intimidating mode, "and it won't make a dime more at the box office."
"Eugenio won't direct it as it is," I replied.
"I'll handle Eugenio," Yordan came back.
"Dammit, Phil. I've heard this kind of talk from you too many times. Maybe you can muscle Eugenio. I've seen what happens with those films where you say that script is good enough. If you want me to do this film, Julian comes back to Madrid with me and we rewrite the script."
Shouting matches did not startle Yordan. He took this calmly, but Julian turned white (saying later that in all our years together he had never seen me so enraged).
Yordan backed off. "Okay. But remember it's now September. We'll have a thirty-day schedule, so we have to go in November and finish before the end of the year." The holidays were always expensive in lost time and money.
"I'll do my best." That's all I could promise.
Posted by William Connolly at 8:54 AM