Chuck Connors and the train crash in PANCHO VILLA 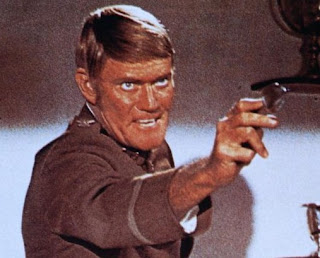 Because of scheduling, our other star on the film, Chuck Connors, didn't have to report until we were halfway through the shoot. Connors was delighted with his role in the film. A comic role was a rare opportunity for him and he hammed it up with gusto, playing the insanely spit-and-polish general who was being driven mad by the slippery, unpredictable Mexican.
After returning from Grenada we had some heavy post-production work to do, principally the stupendous final crash of the two trains. We were all unwilling to actually permit the two beautiful and expensive locomotives to collide, blow up, and be destroyed. The Spanish special effects people came up with a splendid solution. We ran the two trains together as close as possible and stopped them just before contact. Then we substitued two imitation locomotives, hollow shells made of sheet lead that looked like the real thing. For the final few feet before contact, the two fake locomotives were pushed together with poles by men out of camera range. As the sheet lead collapsed convincingly, fireworks inside the locomotives were set off to create a tremendous explosion. The scene was rehearsed as realistically as possible after long discussions with the cameraman about how many frames per second to use, how many cameras to use, and so on. The actual shoot worked beautifully in a single take.
Posted by William Connolly at 7:08 AM