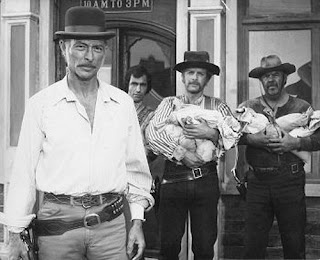 From HOLLYWOOD EXILE Or How I Learned To Love the Blacklist
by Bernard Gordon
There were other star problems. Lee van Cleef was furious with me for failing to use Alex Singer again on this second film. He liked Alex. Alex had a great gift as a director: he knew how to kiss the right end of his stars, a talent I might well have studied. I tried to explain to Van Cleef."It has nothing to do with Alex," I said. "He's a great friend of mine, but this is a Spanish production, so we have to use a Spanish director."
Van Cleef was not appeased. He didn't like me and was only too glad to manufacture an excuse to attack me. "I'm not interested in your problems. And I'm not interested in working with someone who is learning hot to be a producer. You can practice on someone else. Not me."
Van Cleef made other problems that challenged my inexperience. He didn't want to ride a horse. He hated horses. As a stuntman, he'd had too many bones broken while riding or falling off the damned animals. On occasion, the director had to call on me to persuade the actor to do a scene. Van Cleef balked again when we were shooting night scenes in the bitter cold of the Madrid winter. It was too cold, he said. He wanted to go back to his comfortable hotel room, but it was expensive shooting at night, and the actor was holding up the works. I compromised with Van Cleef, promising him that we would make the scene in one take so he could then leave.
The real problems, though, were script problems. Yordan had a talent for writing amusing and original personal scenes that pleased the actors and dressed up the dreary story. But he had no sense at all for story structure. When the continuity made no sense, he would rip off another cute scene and tell the director to shoot it. Most of my Sundays were spent either with Yordan and Sperling thrashing out script problems, or with Yordan and Martin. Little as I liked Sperling, he was more serious and critical of the script; the two would get into loud and nasty exchanges, Sperling insisting on significant rewrites, Yordan snarling that Sperling was no writer and couldn't tell him, Yordan, what to do. Once I thought the battle would become physical. I stood up and announced that my presence wasn't needed and walked out.
On another Sunday, Martin, the director, begged for help with a transition that made no sense. Yordan made a typical and tiresome suggestion.
"Every time we get into trouble on this script," I said impatiently, "you come up with another cute scene. One more comic scene, and the picture is out the window. No audience will take any of the action or suspense seriously."
Instead of addressing the problem, Yordan looked pained. "Look, Bernie, let me handle this. I know where I'm going."
Furious at this put-down, I got up to go. "Since I can't be any help here, there's no point in my staying."
Yordan was as irritated as I. "Since this is your first job as a producer, why don't you just stay around and learn?"
Cravenly, I subsided. Could he be right? I still wasn't certain how much he really did know.
Eugenio Martin was altogether under his spell, and, despite all the trouble he was having with the script, he believed.
On our next film, Yordan was far away in London. Martin depended entirely on me as producer and, when required, as writer. It was a real satisfaction when he said to me with heartfelt sincerity, "I thought Yordan had the answers, but you're the one who's serious about helping. When I have a problem and come to you, you work it out for me. You're the best producer I've ever worked with." As you can imagine, Eugenio and I have remained friends ever since.
Even as we struggled with BAD MAN'S RIVER, we re-opened production on CAPTAIN APACHE, with demands on me for rewrites and demands on poor Alex Singer, long since off the payroll, to reshoot.
Posted by William Connolly at 7:01 AM