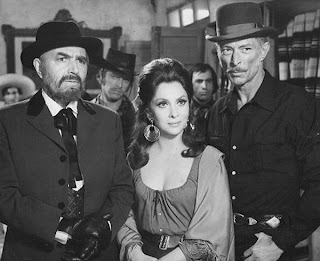 From HOLLYWOOD EXILE Or How I Learned To Love the Blacklist
by Bernard Gordon
The principal casting was, as usual, done out of London by Ben Fisz. He assembled a fairly impressive cast. In addition to Lee Van Cleef, we now had Gina Lollobrigida as our female lead and James Mason as the heavy. Julian, our man in Rome, had to work with Lollobrigida to order her wardrobe. She had expensive tastes and carefully reserved her approval for gowns she intended to take with her after finishing the film. Julian called, troubled about how to handle this, but nothing could be done, as he discovered, without enraging her.
When our star reported for work in Madrid, I picked her up at the airport. She was sullen and instantly let me know where things stood. "You know, I don't usually work for this kind of money," she sniffed, "$50,000."
Since I knew nothing about the deal she had made and didn't want to let her know that was the kind of producer I was, I hesitated to get into this but was saved because she went right on."My agent made this deal for me to be paid at the back end and get a participation. It's a tax deal," she concluded airily.
Posted by William Connolly at 8:14 AM