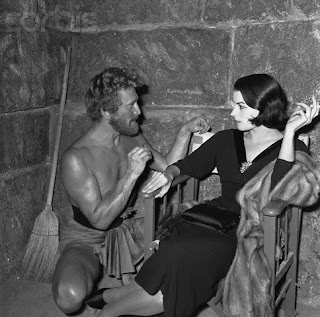 From DINO The Life and Films of Dino De Laurentiis
by Tullio Kezich and Alessandra Levantesi (Translated from the Italian by James Marcus)
To judge from the account in Kirk Douglas's autobiography, THE RAGMAN'S SON, the work on ULYSSES suggest nothing so much as one of Hemingway's "movable feasts". The first encounter between Silvana and Kirk, who was then growing a beard for his role, took place at Cannes in April. Upon her arrival, she found a bunch of yellow roses in her hotel room, along with a note that said, "Welcome. Kirk." Immediately after, the star and his companion Anne were Ponti's guests at Amalfi, making side trips to Positano and Capri. The shoot finally got under way at Porto Ercole on May 18, but the vacationlike atmosphere continued: the star was able to alternate maritime scenes and spectacular dives with plenty of off-camera swimming. When the production moved to Rome, Kirk happily settled in at Villa Gioia, a stupendous residence that had been rented for him on Via Appia.
This gesture was typical of Dino, who had earned a reputation for giving his top actors and screenwriters a princely welcome. During breaks in the shoot, the producer often invited Kirk and Anthony Quinn (who played Antinoo) to take a dip in the pool with him. One occasion was Raffaella's first birthday; another, the producer's fourth wedding anniversary. Douglas was gratified to be treated as one of the family. He also enjoyed working on an Italian film set - a kind of bedlam, with people yammering in every conceivable language.
Of course there were moments of friction throughout the project, but almost all of them ended in laughter. During an August break, the De Laurentiis clan took refuge in the cool air at Arcinazzo, and there was another break in September, to allow Silvana and Kirk to make a promotional appearance together at the Venice Film Festival: they arrived in a gondola for the sumptuous ball at Palazzo Volpi, and the resulting photos appeared in every newspaper.
There was only one exception to this atmosphere of affection; relations between the star and the director remained tense. When De Laurnetiis threw a wrap party at the Apuleius de Ostia Antica restaurant, with all the waiters in ancient Roman garb, Camerini barricaded himself in his house and swore that he wouldn't attend. Dino himself went to lure him out. When the director finally entered the restaurant, Kirk, more antic than ever, welcomed his adversary by falling to his knees and serenading him with an extemporaneous Italian number called "Papa". Embraces, toasts, and high spirits soon ensued: this was the atmosphere of the cinema during Rome's tenure as Hollywood on the Tiber.
Kirk Douglas was the driving force behind the success of ULYSSES. I recall that in Italy, the film broke box-office records in every single city and region. They had never seen receipts like that! And there was no technology like we have today. We shot the film in a small studio at Vasca Navale, slapping together a contraption, which would now seem prehistoric, to rock the ships back and forth as though they were on the waves. For its time, ULYSSES was an excellent film: I saw it again a few years ago, on American television, and I must say that it holds up pretty well. Of course we'd do it completely differently now, starting with the script! In any case, it's a film that triumphed all over the world.
Posted by William Connolly at 6:21 AM