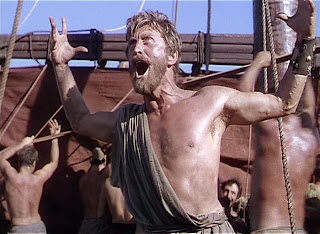 From DINO The Life and Films of Dino De Laurentiis
by Tullio Kezich and Alessandra Levantesi (Translated from the Italian by James Marcus)
Was the author of CONTEMPT around while ULYSSES was being filmed? Did he even make an uncredited contribution to the screenplay?
No. Moravia worked with me on several occasions. I made LA ROMANA, IO E LUI, and perhaps a few other films based on his books. I knew him well, and we had an excellent relationship, but he had nothing to do with ULYSSES. As I recall, Gatti and I were discussing some possible projects for Silvana, who was still under an exclusive contract with Lux, and I said, "We could have her play Penelope." That's how the idea for the film came about. In the end Silvana played two roles, Penelope and Circe. At first there were going to be three, but to make the film shorter, we cut the character of Calypso out of the script.
Once our decision to adapt THE ODYSSEY became final, the first problem was to find somebody to play Ulysses. I immediately thought of Kirk Douglas. To my mind, there were no other choices. Douglas was already a star, and this would allow us to sell the film all over the world - which was essential, because the production was going to cost plenty.
In the Hollywood of 1953 - where you were only as good as your last film - Douglas's ascent to star status had been hoddled by the failure of THE JUGGLER. Still, the negotiations with his agent proved to be sufficiently complex.I showed up in Los Angeles with my rotten English and contacted Kirk's agent, Ray Stark. He would later become co-owner of Columbia, an important producer, and somebody I constantly dealt with for twenty years. Back then, though, he was merely Kirk Douglas's agent.
When I proposed ULYSSES to him, he said, "What is this crap?" He didn't even know who Homer was, he knew nothing about him. I had a first draft screenplay with me, already translated into English. And after he read the script it was even worse: "All these gods, these divinites - how are you going to film them?"
But since what counts in America is the Almighty Dollar, I cut right to the chase and said, "Ray, how much are you asking for Douglas these days?"He said, "For a film like this, two hundred fifty thousand." Today that sum would be equivalent to tens of millions of dollars, I think. Plus we'd have to transport him, put him up in a villa, and so forth.
I suggested that I have a chat with the actor and see if the film would interest him. Kirk read the script and found it fascinating, because he's an intelligent man and maybe he knew something about Homer. He told me that he was willing to do it, as long as I would have Irwin Shaw rewriter the screenplay. I said that was no problem. Later, of course, we had to keep Shaw on a short leash, because he was trying to Americanize Homer a little too much. I brought him to Italy to work with Camerini, and it took a long time: it was lengthy and exhausting gestation. The fact is that in Italy, in Europe, we always have a certain respect for authors like Holmer and Tolstoy.
At first it wasn't easy working with Kirk Douglas. He's a perfectionist, and if he happened to stumble over a line - well you know how actors are. Later on everything went fine, thanks in part to his Belgian friend Anne Buydens, whom I had appointed head of our publicity office. In fact, Anne eventually became Kirk's wife: perhaps I was something of a matchmaker too. In the cinema you have to do it all!
I chose Camerini to direct because I had known him since BATTICUORE and had tried him out on LA FIGLIA CEL CAPITANO and a few other things. He was a real professional. The only problem was that Mario didn't speak any English, and we had to keep a translator on call. He was such an expert director, and such a gentleman, that you couldn't help but like him. When it was necessary, though, he could be very stubborn about getting what he wanted.
Posted by William Connolly at 6:20 PM