Eli gets a job offer. 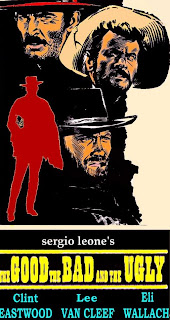 From: THE GOOD, THE BAD, AND ME In My Anecdotage by Eli Wallach
In the mid-1960s, while I was in Los Angeles making a TV movie, my West Coast agent, Paul Kohner, called me to set up an appointment with the Italian film director Sergio Leone. "I'm sending you a script by messanger," he said. "It's called THE GOOD, THE BAD AND THE UGLY."
"What kind of movie is it?" I asked.
"A spaghetti Western," Kohner said. I had never heard of a spaghetti Western, but Leone was offering good money, so I agreed to meet him.
The following morning at Paramount Studios, I met Leone. I was expecting to meet a dark-haired Italian sporting an embroidered Western shirt with a bolo tie and a Stetson hat. Instead, I met a tall, fair-haired man wearing tortoiseshell glasses. He was dressed in a silk summer suit, which almost disguised his paunch - he must have weighed three hundred pounds. His interpreter explained to me that before we discussed the movie, Leone wanted me to see the opening credit sequence for his previous Western, FOR A FEW DOLLARS MORE. In the darkened Paramount screening room, I watched as Leone's name popped up on the screen. Suddenly, a gun appeared in the left corner and proceeded to shoot down each letter of his name to the sound of music. I was hooked.
"Where and when do you need me?" I asked.
As the interpreter explained my acceptance, Leone beamed and shook my hand. "A Roma," he said.
"Si," I said. "I'll see you in Roma."
Posted by William Connolly at 6:50 AM