The cacique of PANCHO VILLA 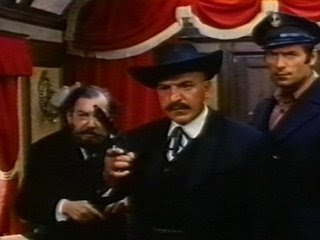 From HOLLYWOOD EXILE Or How I Learned To Love the Blacklist
by Bernard Gordon
Further along in the production, we had to make a major move to a location near Granada, where a small town, Guadix, had a railroad spur line from a mine.I was beginning to have problems with Sacristan. He had loaded the crew with relatives and friends who weren't needed on the production. Sacristan was what might have been called in Spanish, a cacique, a kind of chieftain who doled out jobs and favors and expected loyalty in return. This was fine with me except that the salaries were coming out of the budget and I was fighting to complete the picture on budget. I could not afford to confront Sacristan, but I raised a question about some of these hirelings to let him know someone was looking into costs. He had also insisted on bringing along the sound crew, a tremendous waste of money because I knew the awful rattling of the period train we had shipped down would never permit recording sync sound. He strongly disagreed, but I was right. We weren't able to record a single line of dialogue and sent the crew back.
Posted by William Connolly at 6:35 AM