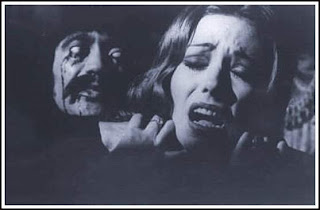 From HOLLYWOOD EXILE Or How I Learned To Love the Blacklist
by Bernard Gordon
In Madrid, Julian was working disconsolately on the HORROR EXPRESS rewrite. He had been away from home and wife in Rome too long and was impatient to finish. I worked with him as much as possible, but I was overwhelmed by the problems of getting the production organized. This was to be an entirely new experience because I had bitten the bullet, fired Sacristan, and undertaken full responsibility for the production. Even forgetting the multi-million dollar Bronston budgets, Sacristan had grown accustomed to working with us as foreigners who had money to burn. None of the previous three films at Daganzo had been brought in for less than a million dollars. I was now determined to work in the local mode and produce films for much less. With the help of a truly Spanish crew, including my new production manager, I budgeted HORROR EXPRESS at $300,000, apart from any British of American cast. My production manager, cameraman, special-effects person, art director, makeup artist, and all the crew spoke no English. For me it was another learning experience.
I was now a one-man operator, entirely in charge and entirely responsible. My only real help, aside from Eugenio, who was having the usual director's jitters at the prospect of starting a film, was my new production secretary, Lisa Doty, an American woman who spoke serviceable Spanish. She had worked extensively in Canada on documentary and television films so she was not without production experience. Lisa and I became good and lasting friends.
Posted by William Connolly at 12:12 AM