DINO The Life and Films of Dino De Laurentiis 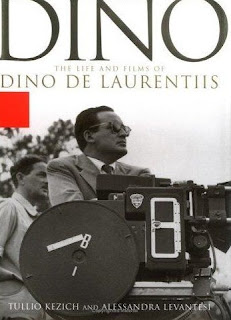 I've finished reading DINO The Life and Times of Dino De Laurentiis by Tullio Kezich and Alessandra Levantesi, translated from the Italian by James Marcus.
A good read, the book filled me in on much about Dino's career and personal life - but seemed a bit disingenuous at times. For example - the perception many have about De Laurentiis was that he was quick to jump on trends. This perception was probably created during the negative publicity generated around the KING KONG remake he did in 1976. The thought was that De Laurentiis was trying to top the box office performance of JAWS and had done KONG figuring that his monster movie would beat that monster movie. It was in competition with JAWS that he also made ORCA. FLASH GORDON and DUNE supposedly both came about because of STAR WARS. This perception was never dealt with in the book. There was no mention of THE GODFATHER, whose success obviously inspired the making of THE VALACHI PAPERS. And, Dino claimed to have discovered Al Pacino for SERPICO in a play in New York. Again, no mention of THE GODFATHER.
Disappointing to fans of Italian action movies was that there was no mention of the following films bearing the De Laurentiis name:
MACISTE CONTRO IL VAMPIRO, aka GOLIATH AND THE VAMPIRES
LE TIGRE SE PARFUME A LA DYNAMITE, aka OUR AGENT TIGER
SE TUTTE LE DONNE DEL MONDO, aka KISS THE GIRLS AND MAKE THEM DIE
MATCHLESS
DIABOLIK, aka DANGER DIABOLIK
BANDITI A MILANO, aka THE VIOLENT FOUR
FRAULEIN DOKTOR
UN FIUME DI DOLLARI, aka THE HILLS RUN RED
TRE PISTOLE CONTRO CESARE, aka DEATH WALKS IN LAREDO
NAVAJO JOE
A MAN CALLED SLEDGE
THE DESERTER
VALDEZ IL MEZZOSANGUE, aka CHINO
CRAZY JOE
TOUGH GUYS, aka THREE TOUGH GUYS.
Posted by William Connolly at 7:02 AM