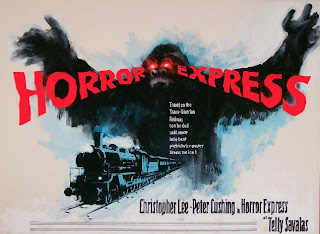 From HOLLYWOOD EXILE Or How I Learned To Love the Blacklist
by Bernard Gordon
In London, now that he had a source of funds, Yordan was working with Ben Fisz to promote a vertical operation with its own distribution company and a program of cheap horror films. He hired Julian and Arnaud d'Usseau at his standard $1,000 a month to come to London to write scripts. Occasionally Yordan popped over to Madrid to check on the production progress, look at some dailies, and deal with the financing.
In Madrid a great deal of the production money came from a revolving credit line at the Banco de Bilbao, one of the leading Spanish banks, where Lizarza and Sacristan had good connections. Yordan became a player. A number of times he took me to meetings with the bank's principal officers at their downtown headquarters so that they could become familiar with me, know that I was now in charge of the local operation, and deal directly with me when necessary.
On one visit to Madrid, Yordan showed up while I was deeply involved in shooting VILLA. "We're going to have to come up with another picture to keep the studio going."
I was much too busy to want to consider this, but keeping the studio going was very much a concern of mine.
"No more Westerns," Yordan went on. "You can't give them away in the States anymore. And without the American market, there's no way to recoup costs."
"So, what do we do?"
"I think we should do a horror film. You can always find a market for them - anywhere. You have any ideas?"
The weather was rainy and dark as I drove us back to town from the studio on a back road. I became so involved in thinking about what film we might do next that I took a wrong turn. Though we were close to the city, I found myself lost in a remarkably remote rural byway and had trouble finding a way to get back on track.
"How the hell did this happen?" I muttered, trying to read the road signs through the gloomy rain.
"You took a wrong turn," Yordan said helpfully. He was not a man who liked being lost. "Get us back on the right road."
I was trying to do that. "Since we've got that beautiful miniature railroad," I said, "and the track, why don't we do a horror story on a train?" I suppose I was thinking of something like MURDER ON THE ORIENT EXPRESS.
This kind of economy was right up Yordan's alley. He agreed at once. "What can we title it?"
A title already? I was scarcely back on the road to Madrid. I threw out the most obvious suggestion. "HORROR EXPRESS. What else?"
As far as he was concerned, that was it. He had already leaped ahead, seeking ways to finance and promote such a film. To my regret, the title stuck. I've always felt it sounded cheap and lessened the value of what was otherwise a good effort. The Spaniards had better taste. When it came to translating the film title for Spanish release, they called it PANICO EN EL TRANSSIBERIANO (PANIC ON THE TRANS-SIBERIAN EXPRESS).
An insignificant footnote to all this has irritated me for years. Somewhere, somehow, it was reported that our lovely miniature trains were obtained from the production of David Lean's film DR. ZHIVAGO, which was also shot, in part, in Madrid. For the record, that is not true. We had our own trains that, I believe, were as good as the one's for Lean's fifteen-million-dollar film. Aside from this, I think ZHIVAGO was a fine film and a great production.
Posted by William Connolly at 6:06 AM