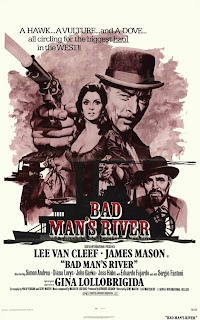 From HOLLYWOOD EXILE: Or How I Learned To Love the Blacklist
by Bernard Gordon
My initial contact with James Mason was even more trying. I admired him greatly as an actor and considered it a coup to get him to work for us. I wondered how he had fallen on such hard times as to agree to work on BAD MAN'S RIVER, but I was looking forward to meeting him. Two days before he was due to start working, I still hadn't heard from him. Frantically, I began trying to find him. At last, I got the right number in Switzerland. "Where are you?" I demanded testily.
"Who wants to know?"
"I'm Bernie Gordon, producer of the film."
"I never heard of you," he dismissed me.
"That's neither here nor there. It's just two days before you're due to start work here, and I've never heard from you."
"I don't like your tone, Mr. Gordon."
"Well, now that I've tracked you down, I have to know whether or not you intend to be in Madrid no later than tomorrow." I knew he had been provided with a couple of first-class tickets. "If you will get to Barajas (the Madrid airport) on a flight from Geneva, I will have time to get you to wardrobe so that you can start work the following day."
He barely managed to say all right and hung up. I wasn't certain whether he would appear. At the airport the next day, I was nervously trying to spot the actor in the crowds getting off a plane. I knew James Mason's looks well from dozens of films. I searched the line of arrivals but no one even remotely resembled Mason. At last a man approached me. He had long, unkempt hair, wore a casual shirt and trousers that looked as if he had slept in them not once but for a month. "You look like a CIA man. If you're looking for me, I'm James Mason."
I never asked him but had to assume he was in his hippie mode. This was, after all, 1971. He was not the clean-shaven, bowler-hatted English gentleman in impeccable Bond Street attire I had expected. He was accompanied by a handsome woman, Clarissa, who was also casually dressed but was more presentable than he. Clarissa, I later learned, was a bright and attractive Australian circus performer. I believe they were married.
I succeeded in getting them settled at the Commodore hotel, then hurried him downtown to Cornejo, the one and only wardrobe company in Madrid. I sat with him as he tried on various costumes appropriate to the time and place of the script and also to his character as a con man. We agreed about everything and by the time we rode out to the studio in the car, we were getting along famously. Mason turned out to be one of my happier encounters with film stars.
Posted by William Connolly at 6:34 AM