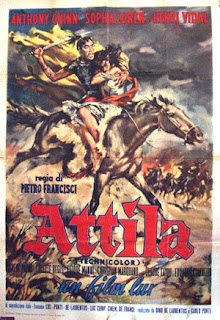 From ONE MAN TANGO by Anthony Quinn with Daniel Paisner
(Quinn moved to Italy to make ULYSSES where he lived unhappily with his wife Katherine in a house rented from Eduardo De Filippo's brother.)
Work was my release, my escape. I took a part in another Ponti-De Laurentiis production, ATTILA, FLAGELLO DI DIO - as Attila the Hun, opposite Sophia Loren and Irene Papas. It was to mark the beginning of a long association with the fiery Greek actress, who at the time preferred to be called "Ereenee". She had an intensity about her that was difficult to ignore, but her frailty was what I found most appealing. We were too much alike to ever truly get along. She seemed to be of my blood. She could have been my sister or my grandmother. My feelings for her were mixed with incestuous guilt, but I could not look away from them.
Irene was the kind of girl who walked into your room and held up her hand. She would not talk to you until she looked under your bed, through your bookcases and your collection of records and photographs. Then she would know who you were. I remarked that her cataloging wold be useless with me - I was living with rented furnishings! - but she was determined. I had no idea what the bad hotel paintings told her about me, but she did not go away.
Posted by William Connolly at 8:24 AM