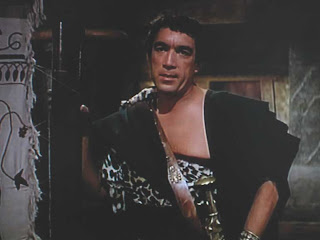 From ONE MAN TANGO
by Anthony Quinn with Daniel Paisner
(Chapter Four of Quinn's autobiography starts with his remembering his friendship with Italian actor Eduardo De Filippo and their efforts to find him a perfect villa inwhich to live.)
What rich history there is here! It is in the air and under foot and all around. It is in Eduardo's big trees. His house overlooks the Pontine Valley - made lush, by design, by Mussolini. On the horizon looms the ancient fortress of Circeo, and, as I consider Homer's account of the Trojan War, I consider also my lousy attempt to re-create the bard's epic for Dino De Laurentiis and Carlo Ponti. It was 1953, and I was cast in ULYSSES, my first Italian film, opposite Kirk Douglas in the title role, and Silvana Mangano as Penelope. It was a mess of a picture, but it signaled a marvelous transformation for me - my Italian sojourn! - and for this it holds a permanent place in my fading memory.
I played an unscrupulous palace nobleman, attempting to deceive Penelope into choosing a new husband, but I could only wear the role like a costume. I had no appreciation for Italy or its heritage. Circeo was a place in my tourist guides, and not a grand old rock inching up from the sea and casting shadows in my path. It was nothing to me. I had no idea of its history, and no grasp of its place in the hearts of most Italians. I walked through the script as it was written, but it called for far more. I was ignorant, and naive, and as I now fix on that great rock, I find myself wishing the part was mine to play all over again.
Posted by William Connolly at 9:54 AM