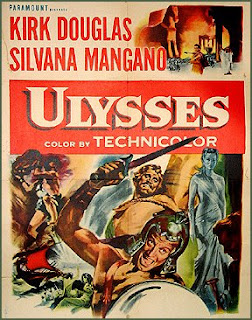 From DINO The Life and Films of Dino De Laurentiis
by Tullio Kezich and Alessandra Levantesi
(Desiring to make an international film with an American star, Dino De Laurentiis decided to do a movie of THE ODYSSEY.)
His memories regarding the early phase of this project are foggy. It's certain, however, that the initial impulse came from the director Georg Wilhelm Pabst, an underemployed German cinematic master. Pabst had come to Italy at the invitation of a Milanese production company to film THE ODYSSEY, and while he was scouting locations on Ischia he met Silvana, to whom he offered a role. Consulting an ancient press clipping that recounts these confused events, Dino can't hide his perplexity: "I certainly don't recall that it was Pabst who got ULYSSES under way."
It's a strange thing to forget, because in 1954, right on the heels of Dino's first international adventure, the eminent novelist Alberto Moravia published CONTEMPT, the tale of a German director summoned to Italy to make a film of THE ODYSSEY. (It was later brought to the screen by Jean-Luc Godard in LE MEPRIS [CONTEMPT], produced by none other than Carlo Ponti.)
The title means nothing to Dino: he hasn't read the book or seen the film. In other words, he was unaware that years after his appearance in Soldati's FUGA IN ITALIA, he had fed the imagination of yet another great Italian writer. For Moravia's novel includes a portrait of a producer, Battista, with more than a passing resemblance to Dino.
Posted by William Connolly at 10:18 PM