The U.S. release of VALACHI 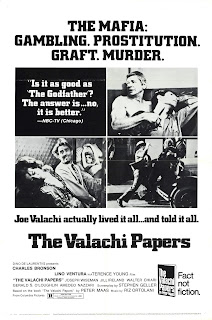 From DINO The Life and Films of Dino De Laurentiis
by Tullio Kezich and Alessandra Levantesi, translated from the Italian by James Marcus
When I made the film about Valachi with Paramount, I hadn't yet moved to America, although I had begun to think about it. But I decided to shoot the exteriors for the film in America and the interiors in Italy. I struck a deal with Paramount for $2 million and made the film, which came out very well. The studio was delighted, as was my friend Charles Bludhorn.
One morning, however, Charlie left me an urgent message to call him. When I got him on the phone, he said, "Dino, I can no longer distribute VALACHI. We got a telephone call from the Mafia, and they told us in no uncertain terms that if we release this film, they'll put a bomb underneath Paramount headquarters."
We were talking about the Gulf + Western Building on Central Park South, so that was one hell of a prospect. Although I was still in shock over the news, I absorbed the blow like an old pro and replied, "Charlie, I see your point. You're the head of an enormous company, and you can't run the risk of tangling with the Mafia. But I don't think the solution is to sweep the film under the rug and write off $2 million. Here's my proposal: I'll pay back the money you advanced me. Then you relinquish the film to me and I do with it as I please." Bludhorn couldn't have asked for a better deal. At once we signed a letter canceling our prior contract.
Then I showed the film to Steven Ross, who was then chairman of Warner Bros., and he was very enthusiastic. We shook hands and signed a contract guaranteeing me $3 million - which is to say, a million dollars more than Paramount had been paying. It happens every time: if you ask for a certain sum before you shoot a film, you can ask for more once it's done, assuming it's done well. They told me that it would take a week, maybe ten days, to draw up the contract, and I said that was fine. "I'm going back to Italy. Give me a call when you're ready."
A week later, in Rome, I got a telex inviting me to come to New York. When I got there, I immediately became suspicious, because instead of setting up an appointment at his office, Ross said, "I'll come see you at your hotel." He showed up, and in so many words he told me, "We like the film very much. But we heard about the Mafia threat over at Paramount, and that's not something we can handle." A second washout! How were we going to solve this problem?
One of my assistants in New York was Ralph Serpe, an Italian-American who had some familiarity with the Mafia. He wasn't personally involved, I should say, but he knew people who were in the thick of it. I asked him which boss I should approach. He told me that the guy lived in Miami, that he was of Calabrese descent, and that they called him Jimmy Blue Eyes. I'll omit his actual last name.
Serpe wangled me a phone number and I made the call. "I'd like to speak with Jimmy Blue Eyes," I said. "He doesn't know me, but I'm Dino De Laurentiis, and at the moment I'm in New York."They very courteously took down my number, and an hour later, the boss called: "What can I do for you?"
"There's something I need to discuss with you, preferably in person. We're both of Italian descent, you and me. You don't know who I am, but - "
"No, no. I know exactly who you are. Come see me in Miami. Meet me at Joe's Stone Crabs."
I took off with Serpe, who was acting as my interpreter, and headed for the restaurant. I got a warm welcome and quickly laid my cards on the table. I told my host that somebody in his circle (I never pronounced the word Mafia) had called Paramount and threatened them. Paramount withdrew, and now Warner had passed too, after hearing about the earlier threat."This film is important to me," I told him. "It's the first one I've produced in America. You have to help me out."
"What can I do?"
"Just leave me in peace. Let me strike a deal with another company and release the film."
"Don't worry about it," Blue Eyes told me. And with this reassurance we became friends. He was extremely pleasant, small in stature, and he reminded me of my old cameraman Aldo Tonti, although he was much more handsome, with those famous, eerily ice-blue eyes.
Once I got the word from him, I went to Columbia, showed them the footage, and asked for an advance of $4 million. They accepted, since the film was worth the price, and THE VALACHI PAPERS was ultimately an enormous success in the United States.
Posted by William Connolly at 5:49 AM