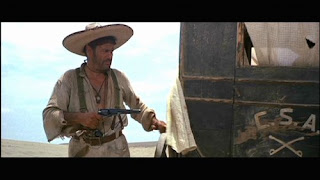 From: THE GOOD, THE BAD, AND ME In My Anecdotage
by Eli Wallach

Back in my room in the Chateau Marmont hotel in Hollywood, I sat down and read Leone's screenplay for THE GOOD, THE BAD AND THE UGLY. At the time, I thought it was an awful title; later it would become a catchphrase in a lot of American political campaigns. I began to question myself. Why did I agree to do the movie so quickly? Was it the money? The challenge? I wondered why Leone was so keen on me playing the role of Tuco. I thought it was because he had seen me playing a Mexican bandit in THE MAGNIFICENT SEVEN. Years later I would learn in an interview with Leone in a book about Italian Westerns by Sir Christopher Frayling the he chose me because of a small scene in HOW THE WEST WAS WON, in which I used my index fingers to pretend to shoot the children of a local sheriff, played by George Peppard. Leone once said that he had been warned to stay away from me because of my Actors Studio training, but that scene had convinced him that I had the right comic talent for the role.
When I got back to my hotel, I called director Henry Hathaway with whom I had made HOW THE WEST WAS WON. I told him that I had met with Leone and that I had made a quick and rash decision and now I felt trapped.
"They want me to play a Mexican bandit in a spaghetti Western," I said.
"Well, you made your bed; now lie in it," Hathaway said.
"What does Leone know about Westerns?" I asked. "An Italian Western sounds like Hawaiian pizza."
Still, Hathaway made a gracious gesture: He offered to take me to a Western costume shop to help me pick out an outfit for the film. He found a paid of unusual Mexican chaps (worn by horsemen to protect them from prickly bushes) that went from the knees down and a wonderful straw hat with a painted eagle above the brim.
Posted by William Connolly at 12:06 AM