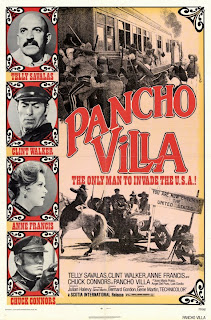 From HOLLYWOOD EXILE Or How I Learned To Love the Blacklist
by Bernard Gordon
Since we hadn't needed the cast for (the minature) work, they had all dispersed. We found, though, that an important scene shot in Guadix of Telly riding in an open flatcar had missed the crucial close-up shots of Telly. I called him in Rome and explained that we needed him back for one day. He wanted to be paid. I told him I had no money but agreed to provide him with a week at a hotel plus a chauffeur and car during his stay.
"Okay. Send me three first-class round-trip tickets Rome-Madrid."
"Three tickets?" I howled. "We only need you. Just you here for one day."
"Three tickets," he insisted.
"Why only three? Why not four or five or six while you're at it?"
He considered this and offered to compromise. "Send me one first-class round-trip ticket for Los Angeles-Madrid."
We settled for two first-class tickets Rome-Madrid. I was beginning to feel like a producer. After he arrived and while he was playing the scene, Telly never let me forget that he was doing me a favor, but it was all good-natured.
PANCHO VILLA, the first production I might call my own, is not a film I would nominate for any kind of award, but, despite script problems, it was finished on time and on budget, was completed, for once, without the endless reshooting of every other Yordan production, and it even received some favorable notices. I was beginning to feel confident in my new role and hoped to go on to bigger and better films.
Posted by William Connolly at 7:35 AM