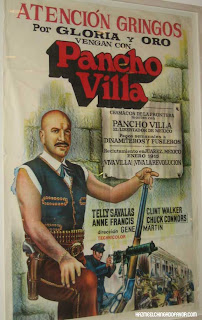 From HOLLYWOOD EXILE Or How I Learned To Love the Blacklist
by Bernard Gordon
Shooting on VILLA progressed. Telly was fun to work with and gave me a taste of the kind of Hollywood I hadn't known. He had a gofer, a man who hopped around on a peg leg and performed whatever task Telly wanted him to handle. Mostly he would go into a bar, look for some attractive women, and invite them over to Telly's place for drinks and the evening. Surprisingly, often they agreed, and one thing usually led to another. Telly eventually settled down with a couple of attractive English girls he brought out to the set while he was shooting. At lunchtime we all ate the hearty food prepared for the entire cast and crew by some miracle-workers who operated from a trailer equipped with butane stoves. The studio paid for all this, being charged each day for the number of meals served. Because Telly's two lady friends ate in his trailer with him, one of the production assistants finally came to me and complained that we were paying for people who weren't on the payroll. What to do? I told him to get lost. I didn't need trouble with the star over the cost of a couple of lunches, and though I was curious what this threesome did during the lunch break, I didn't think it was the right time to inquire.
Posted by William Connolly at 8:25 AM