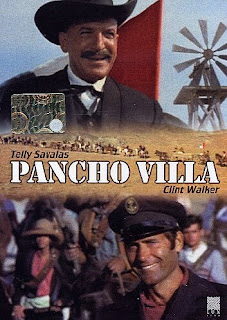 From HOLLYWOOD EXILE Or How I Learned To Love the Blacklist
by Bernard Gordon
Telly was bored riding back and forth all day on the rattle-trap period train. He liked to climb up and ride on top. Eugenio Martin was terrified that a sudden stop would topple him off the train, and he was right, but he couldn't cope with the American star. I was called to climb up on top and insist that Telly desist. Telly also made problems with his co-star, Clint Walker. Walker had recently survived a horrifying ski accident, when a ski pole virtually penetrated his heart. As a result of this intimation of mortality, Walker informed me on arrival that he was through with any ego trips; he only wanted a peaceful existence and friendly relations with everyone. He had gotten religion. Only too happy to take advantage of this, Telly upstaged Walker whenever he could. Walker kept to his word and swallowed Telly's tricks until the last day of shooting.
In the final scene, the two of them are riding the tail end of a railroad car they have detached from General Pershing's train. The picture comes to an end as they disappear into the distance. Telly wasn't happy with this setup. He talked the director into a change that would result in his being featured solo instead of in a two-shot. This time Walker abandoned religion. He exploded and refused to do the scene. The director sent for me.
"Look, Bernie," Telly said, reasonably, "the picture is about Pancho Villa, not some fake invented American friend [Walker's role]. Villa just had a great scene with General Pershing. Now we're ready for the fade out. Should it be on Villa, who everyone knows got away from Pershing? Of should it be played with the fake American friend you invented for the film?"
"You're absolutely right, Telly," I agreed. "But you've been getting your way every time. Clint knows it. Everyone knows it. And Clint's been very nice about it. Right?"
Telly had the grace to grin and shrug.
"This time he'd had a bellyful, and he won't do the scene any other way but how it's written." I pointed at the afternoon light. "It's getting late. We're losing the light. We're returning to Madrid tomorrow. If we don't get the shot right now, we're dead. So do the damned scene."
Telly shrugged. "Sure, Bernie. Whatever you say."
He acted like a good gambler (which he was), who makes a bad bet, loses, takes his lumps, and goes on.
Posted by William Connolly at 6:30 AM