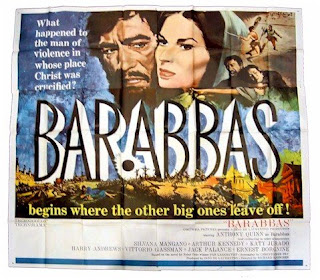 From DINO The Life and Films of Dino De Laurentiis
by Tullio Kezich and Alessandra Levantesi (Translated from the Italian by James Marcus)
By the beginning of 1962 De Laurentiis was ready to start constructing an immense studio complex on the land he had purchased in Rome. With disarming pride, he planned to name the place after himself: it would be called Dinocitta, or Dino City.
With his typical impulse to push ahead, Dino began shooting on the property before he had actually built the studio. In the summer of 1961, the sets for BARABBAS - distillations of Jerusalem and ancient Rome, designed by the architect Mario Chiari - began to rise on Via Pontina. With a budget of ten million dollars, BARABBAS - depicting the inner torments and misadventures of the thief pardoned in Christ's place - was definitely a big-budget spectacular. To direct the film, the producer enlisted a highly skilled American, Richard Fleischer, who was best known for THE VIKINGS.
The BARABBAS shoot left its mark in the anecdotal history of the cinema. For starters, there was its grandiose reputation as "the film that stopped the sun", due to an inspiration of Dino's: on February 15, 1961, he had the acrobatic Aldo Tonti haul his cameras up a steep hill to shoot the crucifixion scene during a solar eclipse. A crowd of thousands of extras was assembled for the scenes in Verona's ancient amphitheater. Last but not least, there was the romantic passion between Anthony Quinn and Iolanda Addolori, who would become the actor's second wife and bear him two children. At first Dino balked at Quinn's whimsical demand that the beautiful Venetian, an assistant fashion designer, be reassigned as his personal tailor. But following his custom of keeping his stars happy - within the limits of possibility, or slightly beyond them - the producer convinced Iolanda to go along with the plan, promising her a handsome bonus. (She was, in any case, hardly repelled by Quinn.) This was neither the first nor the last time that De Laurentiis exercised his skills as a cinematic matchmaker.
In a certain sense, BARABBAS was the first film shot at Dinocitta, when the studio didn't yet exist. Fellini had discussed the novel with me while he was making LA STRADA, pointing out that it offered a character especially suited to Anthony Quinn, who was then playing Zampano. At the time, in fact, Federico promised to direct the movie - just imagine that! But he really liked the book, and he was right.And in any case, BARABBAS proves my point that when you have a great story, you can produce an excellent piece of work even with a skilled professional like Richard Fleischer. Of course, if I had chosen a more heavyweight director, perhaps the film would have snagged another nine Oscar nominations. Instead, it was merely an enormous commercial success throughout the world.
Posted by William Connolly at 8:42 AM