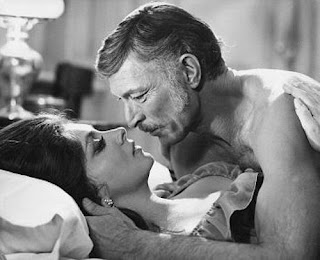 From HOLLYWOOD EXILE Or How I Learned To Love the Blacklist
by Bernard Gordon
(Bernard Gordon was hired by Philip Yordan to produce BAD MAN'S RIVER.)
My problems with Lollobrigida were just beginning. Absolutely nothing pleased her. She even refused to submit to the routine doctor's examination required for our insurance. "I know these doctors," she snapped. "They're all the same. They just want to look up under my skirt!"
"You know, Gina, it's the same on every film. We have no choice. We have to have the insurance for the Errors and Omissions policy."
She ungraciously agreed to see the doctor at his office, but, having conceded this, she figured she had me at a disadvantage and used the moment to ask me for a favor. "My good friend is here. He's a marvelous photographer, and he's going to stay here with me. I'd like you to give him a job as still cameraman on the film." Working on that kind of stringent budget limits we had, I regretfully turned her down and found her even more resentful and uncooperative after that. I was learning that no matter how much they earned, some stars never stop trying to milk more money out of a production.
Her complaints continued until the very last day of her schedule. On an evening when our friends David and Betty Lewin had arrived in Madrid and were having dinner with us, Lollobrigida called me. David was a very successful journalist who specialized in writing about film personalities for the London press. He personally knew almost every screen star on either side of the Atlantic.
"I've never been paid!" Lollobrigida was screaming into the phone. "It's the last day of filming and the money was never deposited in Rome!"
I knew nothing about this. "I'll look into it right away," I promised.
"Right away! Right away! That's not soon enough. I'm supposed to finish work here tomorrow!"
"I'll call Rome now. I'm sure I can straighten it out."
She didn't believe me. "If the money isn't paid tonight, I don't come to work tomorrow. I leave."
If she really did leave, we would miss her important final scene. "That won't be necessary, Gina. I'll get it worked out tonight." But I had no idea how I would do that. She hung up.
I found Yordan and Fisz at a hotel in Rome, explained the matter to Yordan, who turned me over to Fisz, who started to give me a lot of double-talk. "Don't worry. She'll be paid. It's complicated because they want a tax deal. Tell her to relax."
It was my turn to scream. "Never mind all that crap, Benny. You get in touch with her or her agent and get this settled. Tonight. I need her on the set tomorrow."
"Tonight? You want me to open the banks tonight? There's nothing I can do tonight. You shouldn't be so excitable. And you shouldn't talk to me that way. You just go ahead and talk to her." The ball was in my court. I was left on my own.
My loud shouting on the telephone, even from my office in the apartment, had easily been heard in the living room. I explained the impasse to David Lewin. He was amused. "I know her very well," he said. "Let me talk to her." I didn't think that was a good idea, not at the moment.
I called her back. "I just talked to Mr. Fisz in Rome. He's the executive producer who made the deal with your agent. He said he'll get it all settled tomorrow. There's nothing he can do tonight."
She wasn't satisfied. "You can forget about me for tomorrow."
"In that case, Gina, what can I do? I'll have to rewrite the scene, write you out of it. That's a pity. It's one of my favorite scenes in the film and one of your best. You know it's the pay-off for your funny double-crossing character." This hit the actress where she lived, but she still wouldn't budge.
As a last desperate ploy, I said, "Listen, Gina, I have a friend of yours here. David Lewin. He knows we're working together and wants to say hello."
"David Lewin?" Her voice rose in pitch. "Don't tell me he knows what's going on?"
"He doesn't know anything. I'm back in my office. He just wants to say hello."I hurriedly briefed David. He was to know nothing about our problem. He understood and got on the phone. They talked about nothing consequential, just that he was a good friend of mine and had heard good things about the film and was looking forward to seeing it.
When he was through, she asked to talk to me again. "I'm glad you were able to work things out in Rome," she now told me. "I'll see you on the set tomorrow."
I believed that Lollobrigida was right to worry that the deferred salary would be slow in coming - if it ever came. There are many escape routes for contracts made across national borders and Fisz knew them all. But that was not my department.
Posted by William Connolly at 8:43 AM